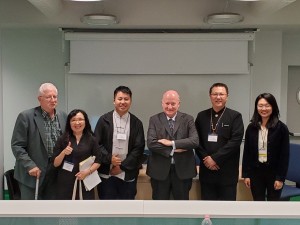 On this blog we invite various affiliates to share their thoughts/activities around Buddhist Studies.

Please note that the views expressed here represent a wide academic spectrum and are not necessarily those of the OCBS or its officials.

The OCBS has recently enjoyed several brief visits from Dr Rey-Sheng Her, Director of Public Relations for Tzu Chi, the flourishing new Buddhist sect based in Taiwan, but already with an estimated ten million members worldwide. Dr Her has also recently been in Beijing and there set up a Foundation for the Practice of Goodness. This Foundation has been registered with the Chinese government and has already begun to teach courses on practical philanthropy, which is what lies at the heart of Tzu Chi’s mission. In March Dr Her was running such a course for Tzu Chi members based at Murray Edwards College in Cambridge, and asked me to give a lecture in the general area of what he called “Buddhist wisdom”. I prefer to talk unscripted and the talk had no formal title, but I spoke about personal responsibility and selflessness, explaining why these values, expounded by the Buddha, form the foundation of what Tzu Chi puts into action. My audience consisted of about twenty Chinese people from Malaysia, Taiwan, Hong Kong and the mainland, ranging in age roughly from 70 to 20; as a few of them were not fluent in English, Rey interpreted into Chinese throughout. My impression was that we interacted very successfully.

About a fortnight later I was in Taiwan and found myself lecturing at Tzu Chi University, which is in Hualien on the east coast, next to the movement’s headquarters. I was invited to talk by Prof. Hui-Xin Lou, Dean of Humanities, and my companion, Prof. Yu-Shuang Yao, interpreted. I spoke on the same topic; however, since I had no script, it was easy to adapt my content to a more academic (though still a Tzu Chi) audience who might, I felt, like to know a bit more about the Buddha’s historical context.

1. The best source of information on Tzu Chi is Yu-Shuang Yao, Taiwan’s Tzu Chi as Engaged Buddhism, Leiden and Boston, Global Oriental, 2012. The name means “Compassion Relief”. In pinyin it would be written Ci Ji, but the movement is Taiwanese and thus uses the older Wade-Giles romanisation.