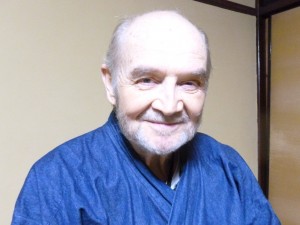 Brian Daizen Victoria is a native of Omaha, Nebraska and a 1961 graduate of Nebraska Wesleyan University in Lincoln, Nebraska. He holds a M.A. in Buddhist Studies from Sōtō Zen sect-affiliated Komazawa University in Tokyo, and a Ph.D. from the Department of Religious Studies at Temple University.

In addition to a 2nd, enlarged edition of Zen At War (Rowman & Littlefield, 2006), Brian’s major writings include Zen War Stories (RoutledgeCurzon, 2003); an autobiographical work in Japanese entitled Gaijin de ari, Zen bozu de ari (As a Foreigner, As a Zen Priest), published by San-ichi Shobo in 1971; Zen Master Dōgen,coauthored with Prof. Yokoi Yūhō of Aichi-gakuin University (Weatherhill, 1976); and a translation of The Zen Life by Sato Koji (Weatherhill, 1972). In addition, Brian has published numerous journal articles, focusing on the relationship of not only Buddhism but religion in general to violence and warfare.

From 2005 to 2013 Brian was a professor of Japanese Studies and director of the AEA “Japan and Its Buddhist Traditions Program” at Antioch University in Yellow Springs, OH. Currently he is a Visiting Research Fellow at the International Research Center for Japanese Studies in Kyoto, Japan where he is writing a book tentatively entitled:Zen Terrorism in 1930s Japan. Brian is a fully ordained Buddhist priest in the Sōtō Zen sect.

Please click here to see a video of a talk given by Prof Victoria for the The Asian Conference of Ethics, Religion & Philosophy 2016 (ACERP2016) in Kobe, Japan in Spring 2016.