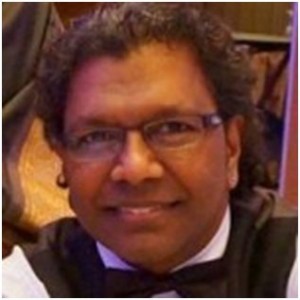 Suren – a native of Sri Lanka, won the first James Madison Trust Scholarship for Asia and joined the School of Political and International Relations at the University of Kent in 2005 for his MA. He wrote a dissertation on the question of Federal Possibility in Sri Lanka, for which he was awarded a distinction. He returned to Canada and engaged with a research project with University of Ottawa. Suren was offered another scholarship for his PhD by James Madison Trust in 2008. Above this, he also won the ORSAS scholarship by the British Government (for the years 2008-2011) Suren is also the recipient of the OSAP award offered by the Ontario Provincial government of Canada. He carries a number of years of experience in direct political activities including Track I & II peace negotiations and political reforms at national level in Sri Lanka.

He is currently a visiting professor at University of St Paul – Ottawa. He has presented more than 25 research papers at various international forums and contributed to several academic books. His recent publications include The Buddhist Monks and the Politics of Lanka’s Civil War (Equinox – UK), and Post -War Militancy of Sinhala Saṅgha: Reasons and Reactions (Oxford University Press (North America) [co-edited] .