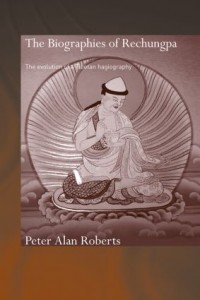 This book traces the lifestory of Rechungpa (1084-1161) – the student of the famous teacher Milarepa – using rare and little-known manuscripts, and discovers how the image of both Milarepa and Rechungpa underwent fundamental transformations over a period of over three centuries.

Peter Alan Roberts compares significant episodes in the life of Rechungpa as portrayed in a succession of texts, and thus demonstrates the evolution of Rechungpa’s biography. This is the first survey of the surviving literature which includes a detailed analysis of their dates, authorship and interrelationships. It shows how Rechungpa was increasingly portrayed as a rebellious, volatile and difficult pupil, as a lineage from a fellow-pupil prospered to become dominant in Tibet.

Written in a style that makes it accessible to broad readership, Roberts’ book will be of great value to anyone with an interest in the fields of Tibetan literature, history or religion.