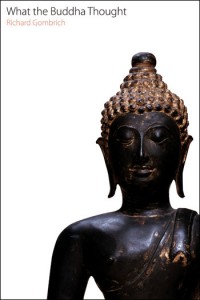 In What the Buddha Thought, Richard Gombrich argues that the Buddha was one of the most brilliant and original thinkers of all time.

Intended to serve as an introduction to the Buddha’s thought, and hence even to Buddhism itself, the book also has larger aims: it argues that we can know far more about the Buddha than it is fashionable among scholars to admit, and that his thought has a greater coherence than is usually recognised. It contains much new material. Interpreters both ancient and modern have taken little account of the historical context of the Buddha’s teachings; but by relating them to early brahminical texts, and also to ancient Jainism, Gombrich gives a much richer picture of the Buddha’s meaning, especially when his satire and irony are appreciated. Incidentally, since many of the Buddha’s allusions can only be traced in the Pali versions of surviving texts, the book establishes the importance of the Pali Canon as evidence.

The book contains much new material. The author stresses the Buddha’s capacity for abstraction: though he made extensive use of metaphor, he did not found his arguments upon it, as earlier thinkers had done. He ethicized and radically reinterpreted older ideas of karma (human action) and rebirth. Similarly, building on older texts, he argued for the fundamental importance of love and compassion, and analysed fire as a process which could stand as a model for every component of conscious experience. Morally, the Buddha’s theory of karma provided a principle of individuation and asserted each individual’s responsibility for his own destiny. To make the book completely accessible to the general reader, the author provides an introductory section of ‘Background Information,’ for easy reference.