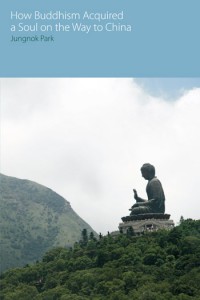 How Buddhism Acquired a Soul on the Way to China tells the story of the spread of Buddhist religious thinking and practice from India to China and how, along the way, a religion was changed. While Indian Buddhists had constructed their ideas of self by means of empiricism, anti-Brahmanism and analytic reasoning, Chinese Buddhists did so by means of non-analytic insights, utilising pre-established epistemology and cosmogony. Furthermore, many specific Buddhist ideas were transformed when exchanged from an Indian to a Chinese context, often through the work of translators concept-matching Buddhist and Daoist terms.

One of the key changes was the Chinese reinterpretation of the concept of shen – originally an agent of thought which died with the body – into an eternal essence of human spirit, a soul. Though the notion of an imperishable soul was later disputed by Chinese Buddhist scholars the idea of a permanent agent of perception flourished in China. This historical analysis of the concept of self as it developed between Indian and Chinese Buddhism will be of interest to readers of Buddhist Philosophy as well as the History of Ideas.