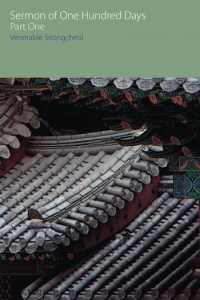 Sermon of One Hundred Days is the first translation into English from Korean of a seminal text in Korean Buddhism. Buddhism was introduced into Korea through China in about the 4th-5th century C.E. and within 200 years became so advanced that it influenced the development of Chinese Buddhism. Chan Buddhism was introduced into Korea around the 8th century and Seon Master Jinul (1158-1210) is honoured as having set the curriculum for the education of Buddhist monks and established Korean Buddhism as it was known for the next millennium.

In this Sermon of One Hundred Days, published in 1967, Master Seongcheol (1912-93) develops Korean Buddhism further by teaching what Buddhist truth is. This Sermon comprehends the vast developments of Buddhism in India and China, including early Buddhism, Abhidharma, Madhyamaka, Yogācāra Buddhism, Chinese doctrinal schools of Tiantai and Huayan and Chinese Chan and Korean Seon Buddhism. The Master analyses the logical structure of various historical teachings, which are connected by the principle of ‘the middle way,’ and encourages his audience to pursue solely the truth to which the Buddha awakened.